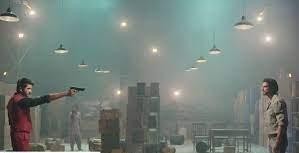 Star Plus’ latest offering Imlie is revolving around Imlie and Aditya’s life.

The news of actor Gashmeer Mahajani who plays the character of Aditya Kumar Tripathi quitting the show came as a shock for the viewers.

Since Gashmeer is quitting the show the makers have decided to give a dramatic end to his character.

The producer of the show Gul Khan stated that the upcoming episodes of the show will leave the fans surprised and bewitched.

Well, Khan’s statement turns out to be true as a new promo has taken the fans by storm.

The promo reveals the major twist that Gul was apparently talking about.

In the promo, Aryan shoots Aditya in front of Imlie.

Imlie runs to save her ‘Babusaheb’ but by the time, Aryan pulls the trigger of the gun and Aditya falls on the ground.

Will Imlie take revenge from Aryan?