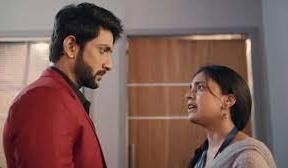 Star Plus’ latest offering Imlie is revolving around Aditya getting trapped by terrorist.

It was earlier seen that terrorist have kidnapped Aditya and put an ear piece on his head which has a bomb in it.

The terrorist will telecast this entire drama in front of the world through television news.

Aryan will get concern about Aditya and will not stop the telecast as he wants to boost the ego of the terrorist so that he keeps Aditya alive.

Imlie will misunderstand Aryan and feels that he is not stopping the telecast as he is enjoying the TRPs that he is gaining by putting Aditya in danger.

Imlie will once again misunderstand Aryan and feels that he is only concern about his profit and gives no heed to his staff.

Will Aryan be able to prove Imlie wrong and save Aditya before it’s too late?