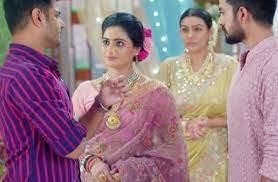 It seems that Samrat will not allow anyone to question Sai for leaving the house without informing anyone.

He will be seen supporting Sai and yelling at Virat for been a bad husband and leaving Sai with no other option but to jump from the window.

Pakhi will once again get angry with Sai and will point finger on her for spoiling her ceremony and taking the lime light.

Pakhi will be seen targeting Sai in front of the family once again and this will disturb Samrat.

He will yell at Pakhi in front of the entire family and ask her to shut up as the matter doesn’t involve her.

Will Pakhi be able to seek revenge from Sai for spoiling her ceremony or not?

Ghum Hai Kisi Ke Pyaar Mein: Samrat decides to go back to or...

GHKKPM: Pakhi angry as Sai grabs the limelight once again

GHKKPM: Devyani past mental abuse resurface gets compared to Sai

GHKKPM: Sai locks all doors to go back to Virat