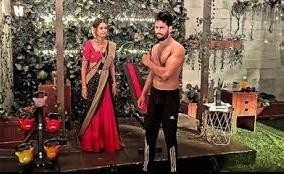 Mehndi Hai Rachne Waali: Raghav gets beaten up by Pallavi

It was earlier seen that Raghav is continuously avoiding Pallavi and doesn’t want to keep any kind of relationship with her as he is angry with her.

Pallavi will try to apologise during multiple occasion but will fail all the times.

It seems that Pallavi will finally give up her patience and goes to Raghav with a broom.

She will ask Raghav to forgive her or else she will beat him up.

Raghav will set scared as he will remember how last time he got beaten up by Pallavi in front of everyone.

Raghav will immediately accept Pallavi’s apology and makes up with her as he doesn’t want to get beaten up by his wife once again.

Will Raghav and Pallavi be able to stay united forever or not?