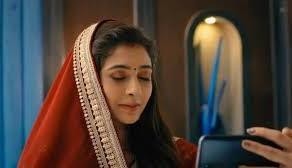 Star Plus show Mehndi Hai Rachne Waali is revolving around the cold war between Raghav and Pallavi.

It seems that the fight between Raghav and Pallavi is getting very intense as Raghav feels that due to Pallavi’s negligence Kirti got married to evil Sunny.

Raghav will see Pallavi talking to Nikhil about not being able to go to Deshmukh house and bring Ganesh as she is a big believer.

Raghav will overhear the conversation and will once again do the unthinkable.

He will get Ganesh ji idol in RR mansion to fulfil Pallavi’s wish but will still show attitude to her as he is still upset with her.

Pallavi will feel overwhelmed as once again Raghav has proved thathe loves Pallavi a lot and will always keep her happy.

Will Raghav be able to forgive Pallavi for the huge blunder or not?