MHRW: Raghav seduce Sulochna to get hold of evidence against Mandar (Upcoming Twist) 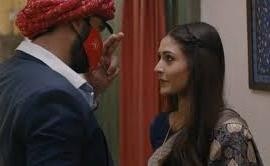 Star Plus show Mehndi Hai Rachne Waali is revolving around a huge evidence against Mandar.

It was earlier seen that Raghav and Pallavi will come to know that there is a clue in Mansi’s phone.

However Pallavi will soon come to know that the phone is with Sulochna.

Pallavi will use Raghav as bait to get the phone from Sulochna.

Raghav will go to Sulochna to borrow the phone as he wants to have an important conversation with his family.

Sulochna who is infatuated with Raghav will fall in his trap easily and will give Mansi’s phone to him.

It will be extremely funny to see Raghav and Sulochna together as Sulochna is trying to get close to Raghav and Raghav is running away from her.

Will Raghav be able to get enough evidence again Mandar to throw him out of their life or not?