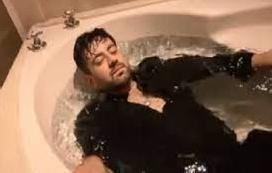 It was earlier seen that Shaurya is unable to know the whereabouts of Anokhi and hence turns restless.

He will search for her everywhere and fails to know where she has gone.

This will leave him restless as he doesn’t want to let Anokhi go at any cost.

He will suffer a heart break and will drown himself in bathtub and tries to end his life.

However ACP Ahir will come on time and saves Shaurya from committing the blunder.

Shaurya unable to live without Anokhi

He will give hope to Shaurya that everything will be under control and will try to unite Shaurya and Anokhi once again.

Shaurya has never been so upset in his entire lifetime and this will leave a huge impact on him.

SAAKK: Anokhi in tricky position choose between love or career

SAAKK: Shaurya sent away by Tej Anokhi rusticated behind his back