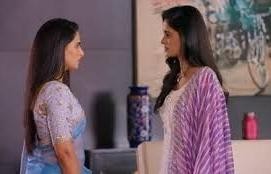 Star Plus show Ghum Hai Kisi Ke Pyaar Mein is going to witness lots of drama in the upcoming episodes.

It seems that Sai is not able to accept Pakhi and Virat’s betrayal and goes to Pulkit to get some relationship advice.

It will become late and hence Pulkit will advice her to stay back.

Though Sai will try to justify her stay at Pulkit and Devyani’s house but Bhavani and Pakhi are not ready to understand anything.

Later Bhavani will also call upon Virat and ask him to handle his wife as she doesn’t return to her house at night.