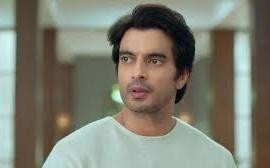 If sources are to be believed, we hear that Gashmeer Mahajani's last day of the shoot is today.

The actor will be winding up his scene as Aditya Tripathi today.

However, there is no official confirmation on the news yet.

Gashmeer, who is loved by the audience for his character Aditya didn't decide to quit the show overnight.

It was also reported in the media that Gashmeer had put in his papers a few weeks ago.

The makers were, however, trying to convince him to stay back since he is the face of the show and the track focuses on him and female lead Sumbul Touqeer Khan. But all efforts went in vain and Gashmeer had decided to quit the show.

It was quite clear from the first day of the shoot that Gashmeer will continue to shoot for his Marathi films and for web alongside Imlie, to which the makers had agreed.

But as the story progressed and the show started doing well, Gashmeer was not able to take up other projects.