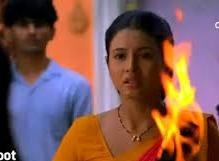 It was earlier seen that Suresh is not able to stay without Nima and her daughters and will hence go back to them once again.

Tulika will come to know about it and will create a huge drama outside her house where she will gain the sympathy of the crowd.

She will create a fake suicide drama in front of her neighbours and puts pressure on Suresh to leave Nima forever.

Suresh will be left with no choice but to follow Tulika and Sunita and leave Nima forever.

Tulika will be happy that finally her plan has worked and Suresh has got a lesson of his life.

Will Tulika be able to break the bond between Nima and Suresh?

Will Suresh be able to take a stand for himself or not?