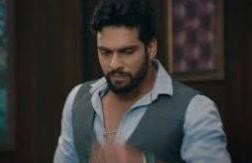 Star Plus show Mehndi Hai Rachne Waali is revolving around a new entry.

It seems that a loyal police officer will be transferred to Hyderabad and will take over Raghav Rao’s case.

The officer will try to dig out details about Raghav Rao’s smuggling business and his other interest.

ACP Laxmi will be impressed to know that Raghav Rao has a huge fan following and people treat him like god.

She will hence get more interested in knowing about Raghav and his life.

Raghav Rao on the other hand will be will be tensed as he has already heard a lot of the new police officer and her ways of doing work.

Officer Laxmi will go to meet Raghav in his house and will warn him against all his illegal activities.

Will Raghav Rao be able to change his ways of doing business or not?