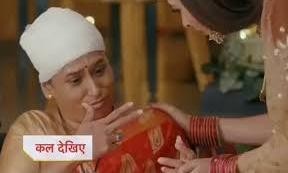 It was earlier seen that Mandar will put knife on Pallavi’s throat and will blackmail Raghav to kill her if he fails to kill himself.

This will have a huge impact on Sharda as she will fight against all odds to protect Pallavi from Mandar.

Sharda will get the power to come out of her room after the paralytic attack on her own to save Pallavi from Mandar.

Mandar will hold a knife on Pallavi hand will threaten to kill her but instead Sharda will hit Mandar from behind and kills him in order to protect Pallavi.

This is going to be a very emotional moment for Deshmukh family as Sharda is back on her foot but Mandar is dying.

Will Sharda be able to forgive Mandar for trying to kill her or not?