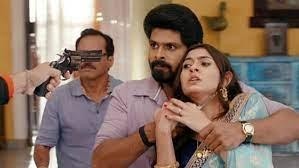 Star Plus show Mehndi Hai Rachne Waali is revolving around Mandar and his antics to keep Pallavi in his life.

It seems that after a lot of ups and down Pallavi will finally expose Mandar in front of Deshmukh house with Raghav’s help.

Mandar’s evil and obsessive side will leave the entire family in a state of shock as the Deshmukh family would not have believed in their wildest dream that Mandar can hurt or try to kill his own family for Pallavi.

Mandar will be seen misbehaving with Milind and threatens to kill him if he tries to interfere in his matters.

This will be the biggest turning point of the show as finally Mandar’s evilness will get revealed in front of the family.

Will Pallavi be able to seek revenge from Mandar or not?

Will Deshmukh family be able to forgive Pallavi or not?