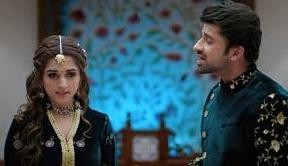 Star Plus show Anupamaa is going to witness some major fight between Kinjal and Paritosh.

It was earlier seen that Rakhi will brainwash Paritosh against his own family and will hence suggest time to move out of the house.

Though Paritosh will try to talk to Kinjal about it but she doesn’t want to leave the Shah House at any cost.

Kinjal and Paritosh had a bitter tiff and chaos over it, which Anupamaa overhears and realises that their relationship is getting affected by all this.

Anupamaa gets alarmed on seeing the deterioration of Kinjal and Paritosh's love relationship.

Hence, Anupamaa decides to talk to Kinjal and convince her into moving by agreeing with Paritosh, without spoiling their relationship.

Will Kinjal listen to Paritosh and Anupamaa or not?

Kavya will secretly enjoying seeing the rift between Pakhi and Anupamaa.

Anupamaa: Anupamaa goes out of the way to help Vanraj build customer

Anupamaa: Vanraj kicks Kavya out of cafe after first customer walks out

Anupamaa: Paritosh tagged as son of Sandwich Wala Star Plus...

Anupamaa: Anupamaa and Kavya are on the same page Sta...