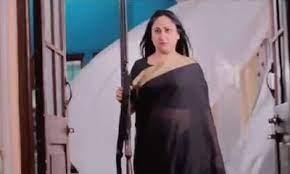 It was earlier seen that Reema will emotionally blackmail Vivaan and gets married to him against the wishes of his family.

Just when Vivaan and Reema mark their entry in the Oswal Mansion, what Geetanjali Devi does is what gets everyone shocked to the core.

Geetanjali Devi wears a black saree and turns a black widow to kill Reema dead after she married Vivaan.

While the bodyguards trap the family and grab Vivaan, Geetanjali takes Reema to the gun point.

Not only Reema, but Simar's life is also in extreme danger.

Will Geetanjali be able to forgive Reema or not?

Will the Oswals be able to stop Geetanjali or not?

Sasural Simar Ka 2: Reema gets married to Vivaan Star Plus ...