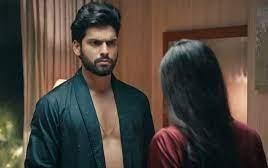 Star Plus show Mehndi Hai Rachne Waali is going to witness some cute moments ahead.

It was earlier seen that Raghav will want Sulochna to be thrown behind the bars for her hideous act but Pallavi will try to protect her as she is still a part of their family.

The two will fight over this and make huge fuzz about it.

Later both Raghav and Pallavi will understand each other’s point of view and try changing their plan.

Pallavi will want Sulochna to be sent to jail but Raghav will not want that.

Difference of opinion between Raghav Pallavi

The two will once again start fighting over it and get angry.

It will be very cute to see Raghav and Pallavi fighting with each other over some menial issue.