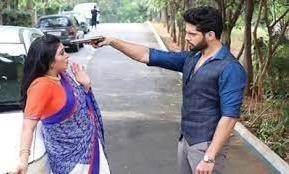 It seems that Sulochna will feel that she will get exposed soon and hence plans to go back.

She will hire a car and instructs him to take her to Hyderabad station.

However she will soon in for a huge shock as Raghav will be the driver in her car.

Raghav is pissed off with Sulochna for trying to create problem in his life and harming his loved ones.

Shockingly he will put a gun on Sulochna’s head and will stop her from running away.

He will threaten Sulochna and force her to confess her crime in front of him and the Deshmukh family.

Will Raghav be able to clear his name or not?