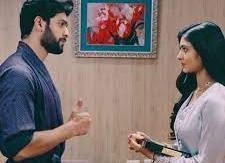 It seems that Pallavi will come to Raghav’s room and sees him watching a video on his laptop.

Pallavi will feel that Raghav is seeing some dirty video and will hence fight with him.

However Raghav is actually watching the CCTV footage that he got from the hotel.

Pallavi is not aware of the fact and will burst out at him for seeing such dirty videos in broad day light in front of her.

Raghav will not understand what Pallavi is trying to say and gets confused.

Funnily Raghav will soon clear the confusion and will reveal in front of Pallavi that he is watching the CCTV footage and nothing else.