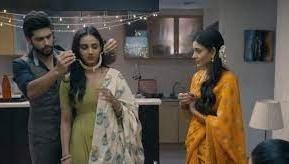 Star Plus show Mehndi Hai Rachne Waali is going to witness some cute moments between Raghav and Pallavi.

Pallavi is trying to create a bridge between Raghav and Kirti so that the brother and sister can leave their better past behind and start all over again.

Pallavi will inform Kirti that Raghav got the necklace specially customised and even designed it on his own.

Raghav will be delighted that Kirti accepted his gift and did not return it to him in anger.

Will Raghav be able to unite with Jaya and Kirti or not?