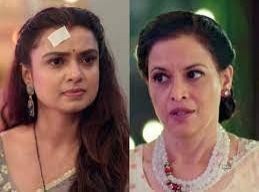 It seems that Anuja sees Imlie in the hospital in Dev’s room and gets angry.

She gets furious and bad mouths about Imlie and her background.

Frustrated Anuja will also raises her hand on Imlie, however, Imlie who has now decided to speak for herself hold her hand and gives it back to her. She tells Anuja that now she will not tolerate her nonsense.

Later, Imlie tells Anuja that she promises to never ever meet Dev and this is not because Anuja has demanded the same, she is rather doing a favour on her.

Malini and Dev stand their being extremely disappointed with Imlie’s decision.