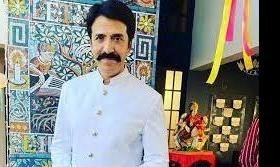 Shaurya Aur Anokhi Ki Kahani actor Sooraj Thapar aka Tej Sabhrewal has tested positive for the virus and is currently admitted at a hospital in Goregaon.

The actor felt feverish when he returned to Mumbai post shooting in Goa on Friday and had to be hospitalized.

Luckily he is not in ICU and is stable right now. The hospital isn't very big and has only a few beds and they hope that he gets well soon.

Thapar was shooting in Goa, where the shoot of the show had shifted after restrictions were laid out in Maharashtra a couple of weeks ago.

However, soon, the Goa government also cancelled the permission for films and shows to shoot and hence, the team returned to Mumbai once again.

While a search for alternate locations is on, some makers are waiting for the situation to get better.