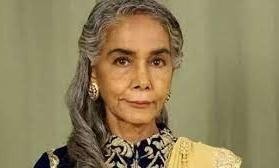 Surekha Sikri, the three-time National Award-winning actor, known for her stunning performances in Balika Vadhu and Badhaai Ho, has died at the age of 75.

Her manager said “Three-time national award-winning actress, Surekha Sikri has passed away following a cardiac arrest earlier this morning at the age of 75. She had been suffering from complications arising from a second brain stroke. She was surrounded by family and her caregivers. The family asks for privacy at this time. Om Sai Ram.”

She was last spotted in director Zoya Akhtar's short film in the Netflix anthology Ghost Stories.