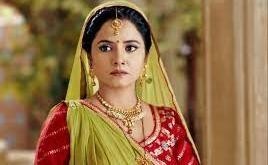 Balika Vadhu is one of the most inspiring shows on Colors the show revolves around Anandi and her life after marriage.

Well, apart from Anandi and Jigar, the adorable Sejal aka Shiju Kataria has won hearts with her motherly love and care onscreen.

Now the exclusive news is that Sejal aka Shiju Kataria has quit the show, she will be not continuing her character post the leap.

According to Sejal, “Well, it was my conscious decision on quitting the show as the leap will have older generation coming in and I was not comfortable playing a mother to co-stars who are nearly my age.”

She further added, “Even when I picked the character of Sejal initially we were told that the leap is a far long plan. Anandi and Jigar would stay Sherya and Vansh for good 2-3years, but the leap was quite sudden and new characters with a completely different track were introduced. I decided that I wouldn't continue playing Sejal post the leap.”

Keep watching this show for more news and updates only on Serialxpress.com.

Balika Vadhu: Kanku to marry against her wish  Balika ...

Shivangi Joshi to play grown up Anandi in Balika Vadhu It s...