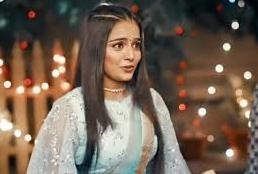 Balika Vadhu: Kanku to marry against her wish

Balika Vadhu is one of the most inspiring shows on Colors the show revolves around Anandi and her life after marriage.

It seems that Maadi Maa is getting Kanku married against her wish as she has turned 18.

Kanku on the other hand is against her marriage as she wants to make her career before getting married to a stranger.

Kanku will be seen raising her voice against her marriage but her mother and Maadi Maa will try to manipulate her by making her realise that she is 18 and they can no more have her in their house.

Kanku will go to Anandi for help as she feels that Anandi has solution for all the problem.

Will Kanku be able to put her foot down and fight for her right?

Will Anandi be able to help Kanku or not?

Keep watching this show for more news and updates only on Serialxpress.com.

Shivangi Joshi to play grown up Anandi in Balika Vadhu It s...