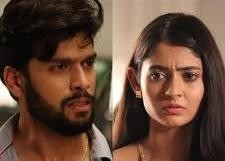 It seems that Pallavi and Raghav will once again have to face the biggest challenge of their life as Raghav’s business will collapse.

Raghav will be left with nothing but just his house.

This will have a huge impact on Raghav and he will hence lose his mind.

Pallavi will be left to deal with the collapse in Raghav’s life alone.

Pallavi will be seen doing menial jobs so that she can run her family.

Raghav’s medication will also be taken care by Pallavi and hence she has to work extra hard to have enough money to deal with the unfortunate incident.

Raghav is not aware of Pallavi’s hard work as he has lost his mental balance.

Will Raghav be able to get back what he lost?

Will Raghav and Pallavi be able to unite once again or not?