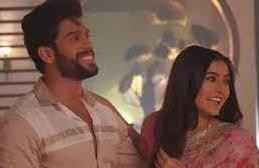 It seems that Pallavi is not able to get over the fact that she saw Mandar outside the hospital.

She will talk about this incident with Raghav as well but he will fail to believe her as Mandar is already dead.

Later Pallavi will be talking to Krishna when Raghav will tell that he believes her that Mandar is not dead as just now Mandar called.

Pallavi will take the phone but on the other end no one will be there.

Raghav will try to make Pallavi understand that just as no one is there on the other side of the phone just like that Mandar is no more as he is dead.

However Pallavi will get irritated with Raghav for playing with her feelings.