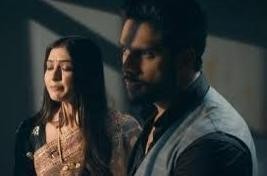 Star Plus show Mehndi Hai Rachne Waali is revolving around Raghav and Pallavi’s fight for justice.

It seems that Raghav will once again reveal in front of Pallavi that he can do anything to keep his sister safe from the jail as it’s difficult for her to stay in jail.

Later Raghav will talk to Pallavi that Kirti has started lying to him about small things.

He will reveal that how Kirti was telling that she cannot drive even though Jaya’s condition was very ill.

Pallavi will get suspicious and will want to know the full details about the night of Mandar’s death.

Raghav for the first time in many years will talk to someone what exactly happened that night.

Will Raghav be able to know the truth or not?

MHRW: Raghav get shot lies in pool of blood Pallavi freaks out

MHRW: Raghav surrenders in police station to save Kirti’s life