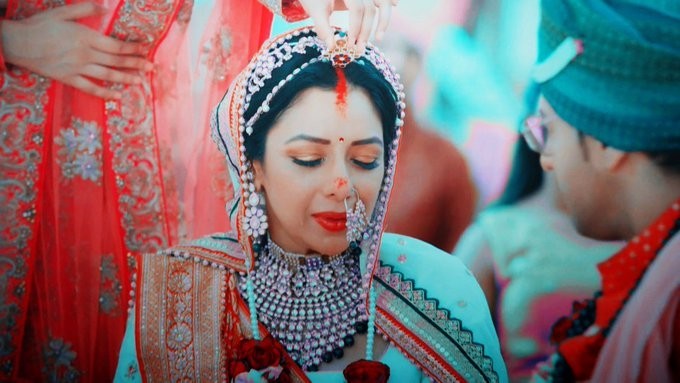 Star Plus's popular hit show Anupama is all set to keep it's audience hooked to their Television screens with it's high voltage drama. The show is up for many twists and turns.

In the Past Episodes We have seen that Vanraj decides to create trouble for Anupama and stop her from getting Married but fails to do so. Kavya tries to make him realise his mistakes.

The Story takes an interesting turn when Family learns about Hasmuk's Health condition while Hasmuk is adamant to get Anupama Married.

Surprisingly Vanraj and Leela too joins the Marriage celebrations after being lectured by the Family Members.

Leela and Vanraj are happy from the Heart and Leela regrets for her behavior. Anupama and Anuj gets Married finally.

Anuj and Anupama enjoy the Rituals

The Shahs perform Anupama's Bidaai after presenting beautiful gifts to her also Writing letters to her apologising for their behavior in the Past.

Kapadias perform few of the Rituals for Anuj and Anupama which they enjoy to their Hearts Content but unfortunately this doesn't last long as Hasmuk falls Lifeless on the floor.

Stay Tuned to Latestgossipwu.com as We bring you with the latest and exciting updates of your favorite shows.

Anupama: Shocking! Anuj backs out from the Wedding

Anupama: Shocking! Anuj backs out from the Wedding Star Plu...

Anupama: Oh No! Vanraj tries to Poison Anuj's mind In the u...

Anupamaa: BLAST from PAST Anupamaa recalls old times with Vanraj