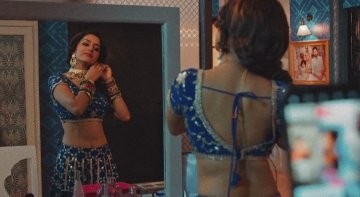 Star Plus's popular hit show Yeh Hai Chahatein is gearing up for high voltage drama. The show is up for many twists and turns.

Recently We have seen that Revathi brings a Snake into the house to hurt Preesha.

But Much to her shock her plan fails as Ruhi and Saransh lock Rudraksh and Preesha in a Bathroom.

Surprisingly as if Luck is in favour of Revathi, the Snake is about to bite Sharda but Preesha saves her which leads to Preesha getting bitten by the Snake.

Unfortunately Revathi uses this in her favor to create rift between Vasudha and Sharda so she blames on Vasudha that may be she has done this is harm Sharda.

Rudraksh however still doesn't Forgive Preesha and reminds her about her mistake.

Something Seductive awaits Rudraksh as Preesha plays a seduction game with Rudraksh in order to bring him closer to herself. Rudraksh fails to resist Preesha thus the Mission gets accomplished.

YHC: Rudraksh saves his lady love from a snake bite

Yeh Hai Chahatein: Sharda teams up with Revathi against Preesha

Yeh Hai Chahatein: Sharda teams up with Revathi against Pree...

Yeh Hai Chahatein: Saransh gets trapped in Alia and Revathi'...