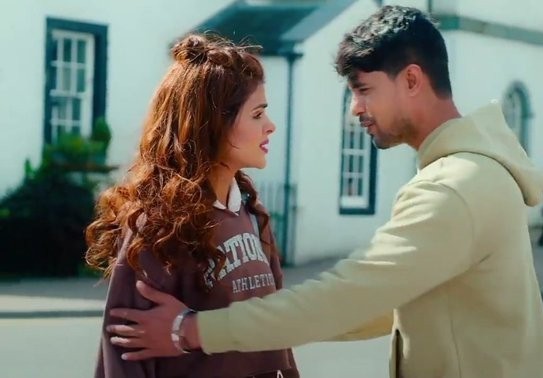 In the Upcoming track of the popular and hit Colors TV's show Udaariyaan the audience are going to witness high voltage drama with Abhiraj planning to avenge Virks for ruining both his Sisters Life.

Recently We have seen that Amrik and Jasmine escapes from the Pind as their Relationship was not being accepted by the Virks.

Jasmine and Tejo's brother Abhiraj gets furious with the Virks. He blames them for the mess in their Lives.

Unfortunately he targets Mahi to teach a lesson to the Virks for ruining them.

He starts to message Mahi while Mahi too messages him and falls for him. Abhiraj and Mahi hates each other but Mahi doesn't know that it's Abhiraj who is messaging her.

The Story takes a dirty turn when Abhiraj crosses all his limits and calls her to a secluded place.

Mahi gets shocked knowing that it is Abhiraj. But then it is too late as he Character Assassinates her in front of the whole Pind and ruins her reputation.

It will be interesting to see how this will effect Jasmine and Tejo's Life.

The drama is going to intensify in the upcoming track and We don't want you to miss it.

Stay Tuned to Serialxpress.com for the latest updates of your favorite shows.

Udaariyaan: Oh No! Tejo shares her Revenge plan with Angad

Udaariyaan: Oh No! Tejo shares her Revenge plan with Angad&n...

Udaariyaan: OMG! Angad gets another chance at Love with Tejo aka Tanya

Udaariyaan: OMG! Angad gets another chance at Love with Tejo...

Udaariyaan: Fateh and Jasmine return to Moga with Tejo

BARC ratings: Anupamaa tops the charts once again  1 A...