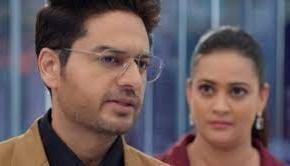 Anupamaa: Devika gets angry with Anuj for hiring Kavya

Star Plus show Anupamaa is revolving around Anuj’s decision to hire Kavya.

It seems that Anuj and Anupamaa will decide to hire Kavya for their new project as she is the best in her job.

Devika will soon come to know about it and will reprimand Anuj for making such a huge mistake.

Devika will reveal that Anupamaa has Mahan Mahila Syndrome and hence cannot do unjust to anyone.

Devika will question Anuj for hiring Kavya as she will create drama in Anupamaa’s life once again.

Anuj on the other hand will justify his act as he did what was best for his company.

He will further reveal in front of Devika that he has warned Kavya that if Vanraj tries to create a scene in his office once again then she will be immediately kicked out.

Will Devika be able to work with Kavya or not?

Anupamaa: Anupamaa and Kavya new alliance Star Plus show An...

Anupamaa: Vanraj cafe shut down Star Plus show Anupamaa is ...

Anupamaa: Samar shuts Vanraj away from his life Star Plus s...