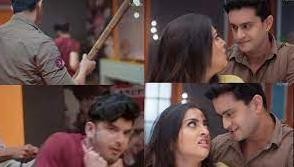 Star Plus show Anupamaa is revolving around Rohan crossing his limits and scaring Nandini.

It was earlier seen that Rohan is not able to digest the fact that Nandini has moved on in life and is happy with Samar.

Rohan will once again do the unthinkable by kidnapping Nandini.

Samar will not be able to control his anger and frustration after he comes to know that Nandini is in danger due to Rohan.

However, somehow Samar finds Nandini and the latter gets into a major fight with Rohan.

In a shocking development, Samar will kill Rohan and the entire blame of murder will come on him.

It will be interesting to see how his family will react when they learn about it.

How will Anupamaa save his son Samar?

Will Anuj Kapadia be able to help Anupamaa to get Samar out of jail or not?

Anupamaa: Anupamaa and Anuj Sajan sequence Star Plus show A...

Anupamaa: Anupamaa no nonsense strategy ahead Star Plus sho...

Anupamaa: Babuji decides not to talk to Vanraj Star Plus sh...

Anupamaa: Anupamaa breaks chain of modesty Star Plus show A...