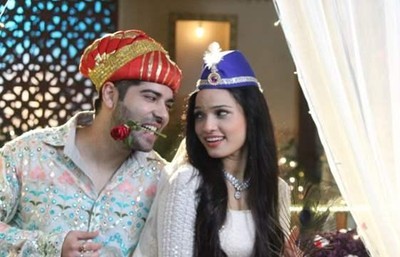 Star Plus show Pandya Stores is revolving around Dhara’s pregnancy.

It was earlier seen that Anita is trying hard to get into Gautam’s life.

She wants to marry him and rectify the mistake she did years ago.

It seems that the show is coming up with an interesting track which will have a ‘Mughal-e-Azam’ twist.

In the upcoming episodes, Anita will be seen donning the look of Anarkali while Gautam will be seen as Salim.

Sources have it that Prafulla will be seen as Akbar in the sequence who’s against Salim and Anarkali’s aka Anita and Gautam love.

It will add to the comic factor in the show and will surely leave the viewers entertained.

Anita wants to rectify her early mistake and therefore wants to marry Gautam by hook or by crook.

Will Anita be able to succeed in her mission or not?

Will Gautam be able to respect her feelings or not?

Pandya Stores: Raavi back in Pandya house as Dhara pregnancy in danger

Pandya Stores: Battleground between Raavi Shivaa gets intense as Shiva fails to give up

Pandya Stores: Raavi humiliates Dhara in front of the societ...