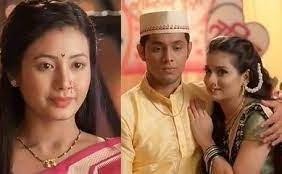 It seems that superstar Viraj will come to Suresh’s house to celebrate Ganesh Chaturthi along with him and his family.

Tulika and Suresh’s mother will be on cloud nine as such a huge star has come to their house.

However Viraj will give more importance to Nima than anyone else in the family.

Viraj will talk about how Suresh use to run away from sets in Sikkim to be with his lady love.

Later Virat will give money to Nima and her daughters as shagun and will leave.

Tulika and Suresh’s mother will be fuming in anger as they hate Nima and will hence plan to steal the money with Nima at any cost.

Tulika is turning out to be very vicious with each passing episode.

Will Nima be able to tolerate Tulika or not?