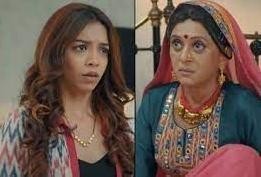 Star Plus show Pandya Stores is going to witness lots of planning and plotting in the upcoming episodes.

It seems that Rishita is fed up of the entire Pandya house and wants to teach them a lesson.

She will plan to tell the entire truth to Suman about Dhara that how she raised her hands on Shiva and Krish and later divided the kitchen.

Initially Suman will get angry on Dhara for crossing her limits with her sons.

However she will soon realise that Dhara has taken a perfect step to teach a lesson to Shiv Dev and Krish.

Unfortunately Rishita’s plan will backfire and instead of being angry with Dhara Suman will shower love to her.

Will Rishita be able to divide the Pandya family or not?

Pandya Stores: Anita gets friendly with Dhara Star Plus sho...