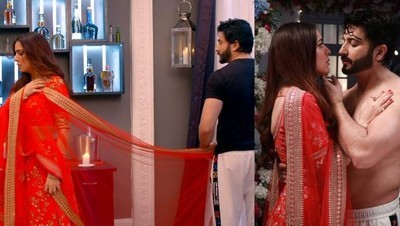 Karan and Preeta's life is all set to take new turn as they are now under same roof.

Preeta flirts with Karan to make Sherlin and Mahira get jealous and thus comes closer to Karan.

Karan is irked but he has that love feelings in his heart for Preeta and thus is getting affected.

While here as Preeta goes away, her dupatta gets stuck in Karan's watch and she feels that Karan is doing it.

Karan and Preeta had a moment of lost romance but then they holds themselves back and stops themselves from losing control.