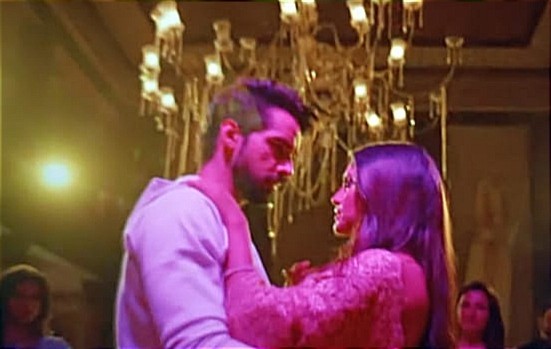 Star Plus TV serial Imlie is again up with a drama blast post Atharava's ignorance towards Chini's confession in rush to save his dear Amigo(Imlie) who has puddled into a serious situation inside a sauna of 100°C in hotel blossom.

Imlie while reporting an exclusive news unveiling fake currency printing in the hotel was seen by the goons and locked into sauna room to die.

Imlie called Atharava, being breathless due to the high-temperature who made a dashing entry, breaking the glass pane of a place where Imlie was stuck.

Imlie once again from her bravery showed that she is a fighter and Atharva on Imlie's one call reached the spot to save her showing to be her saviour.

Imlie and Athrava's team as always won over difficulties saving and fighting for each other against all odds.

Not only the Rathod family but the news spread like fire in all news channels.

Imlie and Athrava are about to have a romantic celebratory dance on family's request.

Will this closeness turn the tables against Chini?

Follow serial xPRESS to know what is going to happen next in serial Imlie.

Imlie: Imlie and Arto becomes more than friends but becomes ...

Imlie: Akash-Keya to back up Chini's plan to snatch Imlie Happiness

Imlie: Imlie risked her life to save Sita Mata Statue in a fireoutbreak in Rathod mansion

Imlie: Imlie(Megha Chakraborty) jumped into fire to save Sit...

Imlie: No looking back for Chini's post deciding to breaking up with Abhishek

Imlie: Chini's atrocious step of writing her love story from blood of her own family

Imlie: Imlie's and Atharva on Gunpoint!

Imlie: Imlie and Atharava became each others sheild of prote...

Imlie: New boundaries set and old deducted with Imlie and At...

Imlie: Cheeni's check and mate move to get Atharva back&nbsp...

Imlie: Argh! Chini's plotting gets worse due to Atharva's and Imlie increasing affinity

Imlie: Atharva blast of anger on Chini after Mockery Propaganda on Imlie