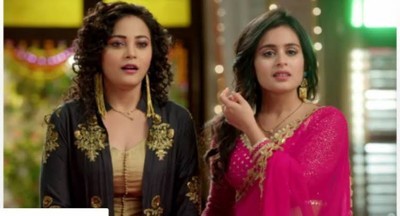 Kunal and Abeer tries to handle their wives and takes then to room, here Kunal asks Kuhu to calm down.

While Abeer's attempt to calm down Mishti seems to go in vain as here Mishti unveils Kuhu's truth.

Mishti unveils as how Kuhu had spiked Abeer's drink and Abeer is shocked to know that.

Mishti and Abeer's tiff and dhamaka

Mishti wants to expose this truth infront of all while Abeer stops her as he knows that Mishti is drunk and will regret it later.

Abeer's all attempts to stop Mishti fails and now here is the big dhamaka as Abeer asks Mishti to stop and not be a home breaker.

Mishti is shocked to hear this from Abeer and breaks down, stay tuned for more exciting updates of the upcoming episodes only on entertainment news website serialxpress.com