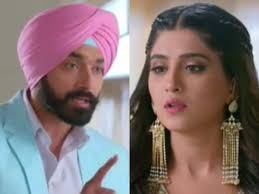 As per latest track of the show Mehar is not well where Harleen is taking care of Param while major drama is still there.

Param is not going to his classes where Mehar shouts at Param making Sarbjeet shocked.

Not only this param also misbehaved with Mehar owing to his insist where Harleen is also shouting over Mehar for demanding so much from little Param.

However where further Sarbjeet and Mehar get indulged in ugly clash over the same where Harleen also added the fuel about Mehar’s extra care for lil Param.